The Vegan Commissary has been one of my favorite spots since the very first time we ate there, just after their opening. My boss heard me talking about an all vegan restaurant opening in South Philly and how excited I was that such a place was going to be so close by work! The Christmas just before they opened he got me a gift certificate there – it was so early on he had to meet Steve Laurence, the owner, at his house to pick up a hand generated gift certificate – I have the distinction of being issued their very first gift cert!

It was a frequent stop for brunch after a Sunday long run or race. The restaurant space was small, upbeat, but with a laid back casual vibe where you didn’t feel out of place in running clothes even among people with nicer attire. Honestly a couple of my most memorable plates of food come out of that kitchen. When I heard they were closing their restaurant space last summer at the end of their lease I was pretty bummed out.  They were looking for a commercial kitchen space that better suited the needs of their wholesale business – they supply a number of Philly restaurants with vegan provisions. They found a great kitchen space at 1429 Wolf Street, still in South Philly!

In September of 2015 the Pope came to Philadelphia. This pretty much made traveling around the city by car impossible the weekend he was here, so the Vegan Commissary thought with Philadelphians stuck in their respective neighborhoods, why not do a pop up “Vegan Popeocalypse Provisions” market to try and serve their neighbors’ market needs? They offered sauces, spreads and pickled items. The market concept was so well received they decided to make it a weekly thing! This was pretty exciting news for me.  It’s easy enough to swing by there every couple of weeks when I find myself in South Philly on a Saturday.  They started offering breakfast sandwiches, whole entrees and composed meals to go.  Could it get any better?  Why yes it could!  They now do occasional Chef Table meals where you are part of a handful of people who can sit in the kitchen at the Chef’s Table and watch the action of your meal being prepared up close and personal! I haven’t had a chance to attend one yet, but look forward to attending one soon!

Also, in addition to the Saturday 9AM to 3PM and Sunday 10AM to 2PM the Vegan Commissary recently started to have weekday hours – Monday through Friday 11AM to 3PM.  This I did take advantage of the other day.  I picked up lunch on the fly but got to obusy to eat at work…so it turned into that night’s dinner! I picked up a Cauliflower Quiche and Sesame Noodles.

Make that Order to Go! 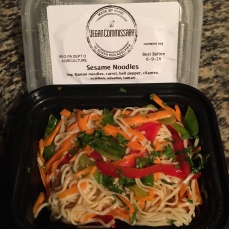 As the summer weather rolls in this is this a great option when you don’t feel like heating up the kitchen with the oven or standing in front of a hot stove. Also these dishes were refreshing for a warm afternoon or evening.  The noodle salad was just what you would expect – crisp fresh vegetables mixed with Asian noodles with a bright, peanut sauce that had the right amount of heat. The cauliflower quiche, which I did warm slightly in the microwave, was on point textually and taste! Creamy but firm with cheesy flavor was complemented well with their scratch made ranch dressing.  Also the summer salad onthe side was a great combo of vegetables that seemed to be quick pickled with a nice balance of acid and sweetness. I am happy to once again be able to grab some innovative and delicious dishes from one of my favorite spots!  If you find yourself in South Philly, I encourage you to swing by and see what their market is offering that day!  Make sure to follow their Facebook, Twitter and Instagram to stay updated on what they have going.

Steve was nice enough to take some time and answers a few questions I had for him. I always like knowing what is on the minds of the chefs that create the food I love and maybe a little bit of what inspires them to create it. I hope you enjoy this mini interview because I hope to include more content like this in the future.

ME: Growing up, my grandmother was my main influence in my love of cooking.  Was there anyone specific that influenced you and your love of cooking?
STEVE: My Dad and my grandmother, his mom. I lived with my grandparents when I was very young. My grandmother would ask me what I wanted for lunch and most days I would say farfel soup (chicken soup with broken up bits of matzoh). She would say ok and then go to the market and get a chicken. I always say that’s how I learned patience but it’s also how I learned what fresh food was all about. She always bought the cheapest cuts of meat and spent the whole day in the kitchen making something good out of it. Her food was never fancy but always good, hearty and earthy. It’s the peasant style that is my favorite to cook today. My father cooked dinner for us four times. I can still remember every moment preparing those dinners. Ripple cut carrots, waffle cut fries (pommes gaufrettes to my francophile father), grilled bread and…hamburgers! With caramelized onions.The fun, the excitement, the anticipation! No meals ever tasted better or were more fun.
ME: Philadelphia’s vegan scene is certainly booming and from what I can tell it is one of the most innovative when it comes to conceptualizing new dishes.  Vegan Commissary, in my opinion, certainly ranks up there as putting out some innovative cuisine.  Where do you draw your inspiration from when conceptualizing a new dish?
STEVE: Lots of things inspire us. Some dish we ate, a technique we want to try, the ingredients themselves. There are so many fun events that revolve around food and vegans are often not able to participate. Lots of the things we do are to offer those opportunities to the vegan community.
ME: When did you become vegan and what made you to decide to take that path?
STEVE: Right after I graduated from The Restaurant School in 1978, my father was diagnosed with cancer. As part of his treatment, he began practicing Macrobiotics. As a result he was able to hold the cancer off for several years. As I was cooking for him and helping with his care, it dawned on me that eating healthy might be a good thing to do before one was on death’s door. As I learned more and more about the Macrobiotic lifestyle and the broader definition of health and conscious eating, It lead inevitably to where I am today.
ME: I love the market idea and how it is developing.  Can you tell us what plans you have for the market concept – do you see it expanding in scope or in space? And this is really for my personal curiosity – any chance the ‘Creamed Chipped Beets’ will ever make an appearance at the market??  That is still one of my all time favorite plates of food – and that is from any restaurant, not just yours!
STEVE: We like the market idea as well and would love to see it grow. As with everything, it depends on the acceptance and support it finds in the community. As for the beets, that dish is a favorite of our chef, Damian (he was very happy to hear your comment), so I’m sure it will return but probably not at the market.
ME: Thank you for being part of the vegan scene in Philly, it is certainly better and tastier with you here!  Where do you see the vegan movement going in Philly; is there more room to grow or do you see a saturation point?
STEVE: Thanks for the kind words. I don’t think vegan dining will reach a saturation point for quite some time as there are new people wanting healthy, great tasting, plant based food every day. I do think that new vegan businesses need to have a clear vision of where they want to position themselves in the market as we may not be ready to support multiples of the same business yet without cannibalizing sales.