This past Sunday was cold, rainy and very dreary. The kind of day you just want to hang out with some friends and eat comfort food.  And what is more quintessential than Mac and Cheese when it comes to comfort food? So as luck would have it my wife and I were attending the very first Best Vegan Mac and Cheese  contest ‘The Philly MAC-Down‘ held at The Rotunda in University City. The contest, benefiting the great advocacy mission of the The Humane League, was organized by V Marks The Shop which is operated by Carlo and Carmella who are looking to take this online market place to a Philly brick and mortar store front in the near future!

Having just finished the Broad Street Run earlier, we were really ready to eat, a lot, and with nine contestants offering their version of the comfort food classic we weren’t disappointed and from the looks of things wouldn’t be leaving hungry!  In addition to the contestants, Rachel Klein of Miss Rachel’s Pantry, one of tonight’s judges, was there offering her creamy and delicious version of mac and cheese. This was not in the contest of course since she is a judge! Elena Mascherino, owner of Love Chunk Cookies was giving out Chocolate Chip, Chocolate Dipped Peanut butter, and Salted Pistachio cookies which were fantastic! And as a fan of kombucha I was also thrilled to see Inspired Brews there dispensing their kick ass kombucha. I have been a fan of this company for a few years now! 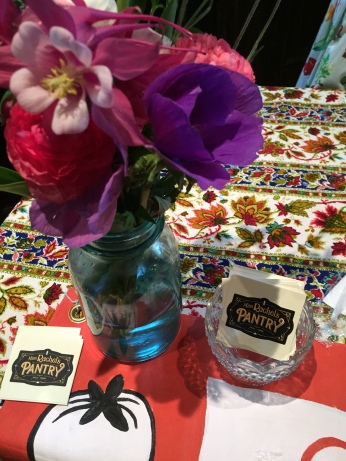 The room was packed with eager and hungry people but we didn’t have long to wait before we started to parade around the venue and collect our samples from the contestants. The offerings ranged from what you would expect a classic mac and cheese to taste like to really innovative and thoughtful creations.  We had ballots to fill out as we get to place a vote for ‘Crowd Favorite’ the Philly’s Choice, and I was keeping notes on my phone as I ate my way around the room! All nine were tasty and could stand up as a hearty meal contest, however I was definitely zeroing in on a few favorites.  My final decision may just need a helping of ‘seconds’ just to make sure!

Carmella and Carlos are so personable and engaging, they kept the evening flowing right along with some help from the DJ Flufftronix.  In between bites we were hoping lady luck was on our side as they announced raffle prices.  Karen won a box of Banza chickpea pasta! Other prizes included items from Follow Your Heart, Bob’s Red Mill, and Califia Farms.

All the while the three judges, Rachel Klein, Marc Mebus of Blackbird, and Sean Gorman of Dottie’s Donuts were carefully deliberating the food.  I mean, these guys were not joking around; watching them go back and forth talking with each other you could see they were legit judging these dishes. 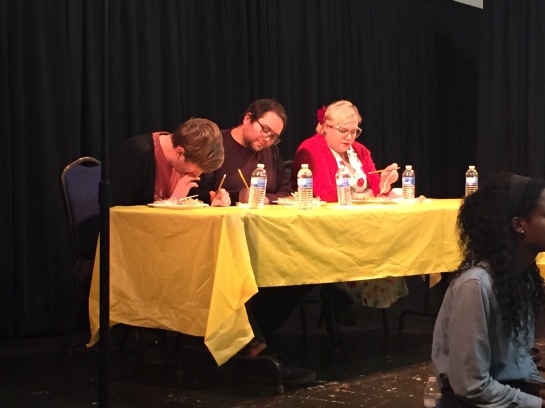 To wrap up the eating festivities contestant Vegan Chef Lenka served up her creamy and rich creme brulee for everyone to enjoy.  As a huge fan of sweets after a savory meal, I was very appreciative for this and was nice of the restaurant where she works, The Plough & The Stars, to provide it for the guests.

Well the only thing left was to find out the winners of this contest.  Announced first was the Philly’s Choice Winner – that was awarded to Plant Power Couple, Brittany and Terrence, for serving up their ridiculously legit ‘Boozy Bacon Mac & Cheese’ using culinary wizardry to turn coconut into bacon bits! I think I will make this one at home very soon!

Now it came time to find out what the judges were thinking about for all that time! There was an award for Most Original and that was taken by Falynn Koch, who offered up a innovative dish of mac and cheese meets green bean casserole, resulting in a really good umami bite of food.  The third place finisher was Cailtin Downs who offered up ‘Pizza My Heart’ what I thought was a dish reminiscent of what I grew up eating, I liked it a lot. Runner up was awarded to Teagan Kuruna, offering a slightly spicy version complete with what seemed to be a bechamel sauce base. Taking home the First Place Finish and 2016 Best Vegan Mac and Cheese Championship was LJ Steinig with a veganized version of her mother’s  home style mac and cheese that ate well, was creamy and had hunks of vegan cheese throughout and was just so good! The win was well deserved!

It was a long day but one that ended well and certainly culinarily satisfying! I want to thank Carlo and Carmella for putting together such a fun filled and organized event. For a first time event it appeared to go off without much of a hitch.  I know they are planning future events, such as the Philly Vegan Pop Flea Market where you can shop with vegan confidence knowing that the products are all ethically sound! I also heard that the next cooking competition will be a chili cook off…hmmm…perhaps it is time I sharpen my knives!

For Additional photos please visit The Philly MAC-Down Album on my Facebook page!

2 thoughts on “The Philly MAC-Down”