Currently I am training for a half marathon in April, and I am going to try and make it my first sub 2 hour half marathon.  Back in December, during the unseasonably  warm stretch of 60 degree days, my coach Cory Smith said it would be a good idea to pepper in some 5K races during our training.  These 5k races will help with my speed development. He mentioned a unique 5K race organized by Bryn Mawr Racing Company held at the Philadelphia Naval Yard on Saturday, February 13, 2016.  It is called Feel the Love and you and your partner run as a team but in opposite directions to get a combined average finish time for your team. My wife and I thought it sounded fun and since December was so warm, we figured how cold will it get this winter.  Well we certainly found out the answer to that question during this race!

Race day – I wake up a little tired and not feeling 100% but I have most of the day to gear up.  Part of the uniqueness of this 5K is that it takes place in the afternoon, not early AM like almost all other races.  The day started out 25 degrees with a slight wind and as the day moved along the cold and wind intensified.  To be honest, I wasn’t as excited and geared up to tackle this race.  Normally I am psyched about every aspect of a race from bib pick up to after race festivities, but today I would be happy when it was done and I wasn’t in the cold anymore.

We made our way down into the Navy Yard and parked about a block away from the tent for bib pick up which was also right next to the Start / Finish Line.  The Navy Yard is totally flat and for the most part pretty wide open.  The starting temperature was 18 degrees with wind gusts up to 40 miles per hour, so there was no hiding from the wind on this course.  I did some warm up laps, but not nearly enough it seemed.  We met up with a couple of friends Matt and Nickki who were running as a team, then we made our way to the Start line, determined which route each of us would go and just like that we were off.

We were at the back of the start line so for the first quarter mile I was trying to loosen up the legs a bit and for the next quarter mile I was jockeying for a clear position, trying not to be in the way and making my way around slower runners.  Having broke the most basic rule of racing, never trying anything new on race day, I also spent time adjusting to wearing sunglasses, two pair of gloves and a buff to cover my mouth and nose – all of which came into play because of the extreme temperature. My sunglasses were fogging up when my buff covered my mouth and nose, to the point that I couldn’t really see. My Garmin alerted  me that I completed my first mile.  I didn’t check to see my split time and I didn’t have to look to know that I was behind if I wanted to break my 5K PR.  5Ks are just too short to try and make up any missteps so at this point I could coast to the finish or push and run hard and learn from this race.  I pushed mile two and as I was feeling a bit more fluid and warm.  During the second lap around the course running along the river it was actually quite nice…no wind and the sun was out from behind the clouds.  For a moment I thought I was actually overdressed and TOO warm!

This quickly changed as I as made a left and headed away from the waterfront.  The last half mile may have very well have been the hardest half mile I have run.  The wind seemed to be coming from two directions at once and biting cold.  I felt like I was running in place.  Breathing was difficult, like I had a huge weight on my chest. I made one more left and the finish line came into sight.  I took deep breaths as I pushed towards it, not taking my eye off the clock as the seconds ticked away which felt like minutes.  I crossed over the finish line, reset my Garmin and took up post at the finish line to cheer on fellow runners while waiting to greet Karen as she crossed the finish a few minutes behind me.

While I missed a PR by 1:36, overall I am happy that I decided to run this race rather than blow it off. It would have been easy to stay home or head to the gym and just run a 5K on the treadmill, however one of the greatest benefits of running for me is that it takes me out of complacency.  It pushes me mentally and physically beyond my comfort level, something that I never really did before I started to run. 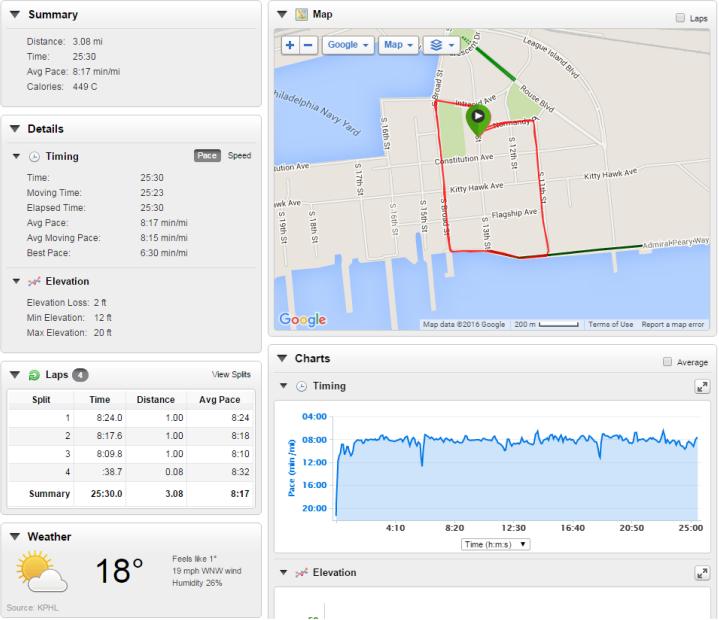 Feel the Love 5K by the Numbers.